From Creative Commons
(Redirected from 4.0/)
Jump to: navigation, search 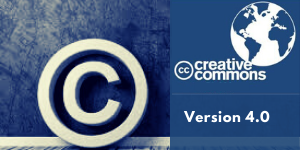 (If you are looking for the final policy decisions and versioning notes for 4.0, see the Version 4 page. The set of pages you are currently on are the pages that were maintained during the license development process, and provide a detailed history of the drafting of the license.)

Version 4.0 of the CC license suite was published on 25 November 2013, after CC conducted a multi-year versioning process. The first public discussions of 4.0 were held at CC's Global Summit 2011. The public process was kicked off with a blog post laying out some of the key reasons for pursuing a new version at that time.

Since CC's launch in 2001, five major versions of the of the license suite have been published. CC licenses constitute a globally-recognized framework, developed in consultation with legal experts and CC affiliate institutions in over 70 jurisdictions. Over 500 million works on the Web are under a CC license. Today, Creative Commons licenses, public domain tools, and supporting technologies are the global standard for sharing in culture, education, government, science, and more.

Version 4.0 represented a tremendous opportunity to ensure the license suite was ideally crafted to further CC's vision and mission over the next decades. We are thankful for the input of all of those who participated in this important discussion.

The Creative Commons staff, board, and community identified several goals for the 4.0 license suite, tied to achieving CC's goals and mission. These include:

Organization and purpose of this wiki

This wiki served as the central location for documenting key discussion topics and suggestions for improving the license suite in version 4.0, together with supporting information and relevant links. Its function was to supplement, not replace, the CC license discuss email list (subscribe) that served as the main discussion forum for the versioning process (as with prior versioning efforts). It is now maintained as an archive for those who wish to read the details of the versioning process and the discussion proposals on the various topics covered.

CC prepared pages on the key topics identified. Many topics that did not fit into the prepared framework began in the Sandbox, with some eventually moving to individual topic pages.

As a license steward and steward of the commons, our goal was to ensure utmost transparency and inclusiveness. The 4.0 process was conducted in line with our prior versioning efforts, with periodic publication of license drafts for public comment and documentation of issue resolution as it occurred. One important difference from our past efforts, however, was a formal requirements gathering period that ran for a period of time prior to publication of the first draft. During this period, we strongly encouraged the broadest participation possible by everyone with an interest in the commons and the role open licensing plays in its future.

The primary discussion forum for issues relating to the 4.0 versioning process was the CC license development email list.

Various aspects of the license suite were improved in the version 4.0 licenses, after gathering and rigorously debating and analyzing these items along with corresponding proposals for handling them. CC encouraged the broadest possible engagement in this process; this was a particularly important goal during the requirements gathering stage where everyone was strongly encouraged (and our affiliates expected) to provide feedback on proposed changes and suggest other changes they would like to see.

Prior versioning efforts were also reviewed, including relevant discussions of important topics previously debated by the CC community and discussions related to their resolution. Throughout the process, we took these into account, particularly where a request was made to revisit and potentially change direction in 4.0.