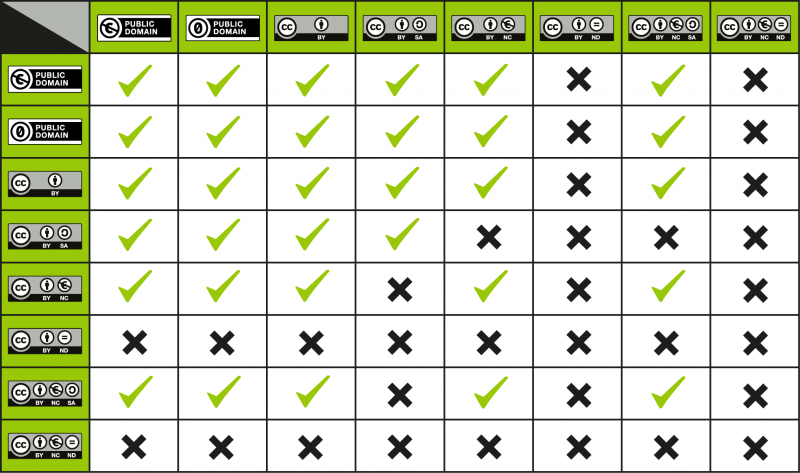 Choose two works you wish to combine or remix. Find the license of the first work on the first row and the license on the first column. You can combine the works if there is a check mark in the cell where the row and column intersect. Use at least the most restrictive licensing of the two (use the license most to right or down state) for the new work. If there a cross at the intersection of the row and column then you can not just these works. This probably indicates that one of the two licenses may not used for commercial purposes, or one of the licenses does not allow for derivative works to be created

It is not possible to mix works where the first work is placed under a Creative Commons Attribution-Share Alike license and the second work is licensed under a Attribution-NonCommercial-ShareAlike license. The ShareAlike building block in first license requires that the newly created work is released under that license and can therefore be used commercially, the second license wants you to release the new work under a license that does not permit commercial use.

It is not possible to use in a remix where NoDerivative is a building block in processing a work. All works have been released under this License may only be distributed. Into their original form There may of these works so no cropping or lower resolution works be made available. May also (parts of) these works are not used for other works.