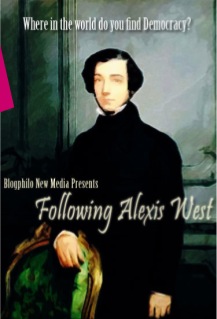 The documentary film Following Alexis West chronicles the effects that New Zealand’s switch to a proportional representation voting system has had on its culture and politics since 1996. Mirroring the journey taken by French political theorist and lawyer Alexis de Tocqueville to America to examine the workings of democracy in the early nineteenth century, which culminated in the writing of De la démocratie en Amérique (Democracy in America), the film’s producer Brian Boyko travels to New Zealand from the United States to document the country’s political and cultural achievements. The documentary examines the way in which New Zealand’s reconfigured voting structure may serve to prevent ‘gerrymandering, negative campaigning, civic disengagement, and undue influence of powerful lobbies, as well as taking a look at problems with democracy in New Zealand that [are believed not to exist] in America, like restrictions on satire and film classification.’ (www.blogphilo.com/ main/?page_id=9) Interviews are conducted with prominent New Zealand politicians, political scientists, media figures, bloggers, and ‘just plain old folks in the pub,’ with a view to gaining insights into the success of the proportional representation voting structure, and ultimately what the relationship is between NZ’s parliamentary system and its people.

On the eve of the 2008 US Presidential elections, Boyko seeks to derive invaluable lessons for his homeland, asking ‘Where in the world do you find Democracy?’ and ‘Would you go to the ends of the Earth for what you believe… literally?’ Specifically, Boyko is seeking answers to whether the proportional representation system provides a fair compromise between conflicting interest groups, and whether governments formed in New Zealand are stable and able to govern effectively.

To date, 28 hours of footage have been shot in Auckland and Wellington, New Zealand, and are in the process of being digitised and uploaded. Secondary shooting in Austin, Texas, is to follow, with post-production to be complete by March 2008. This will allow the documentary to be submitted to North American and European film festivals from April 2008.

Following Alexis West is being produced independently, and will seek distributors for the film’s commercial release. The documentary project involves the production of three separate end-formats: a 90-minute feature, released to American and European film festivals; a 56-minute New Zealand- only separate edit ‘By Popular Demand’; and over 20 hours of raw footage. According to Boyko, the digitised raw footage will most likely be released under the Creative Commons Attribution-NonCommercial-Share Alike 3.0 licence, whereby it will be offered to the New Zealand film archive, the South Seas Film School, and the University of Texas School of Communication Radio-Television-Film program for educational purposes, as well as released online for further historical and other non-commercial projects. In addition, Boyko hopes to utilise the new CC+ model for commercial use for non- ShareAlike projects.“

Following Alexis West producer Brian Boyko says that he accepts Creative Commons as a normal, ordinary part of the day-to-day functioning of the web. Inspired by the release of Cory Doctorow’s writing under Creative Commons, and the Flickr license integration, Boyko believes his work should be open to anyone who is willing to use it fairly. “If a kid wants to remix Sir Geoffrey Palmer into a rap battle with Eminem, best of luck to him. Creative Commons is great because I don’t have to say up front who -can- use the material. Anyone can use the material with the guidelines provided; if you want to step outside the guidelines, well, it’s possible, but we need to talk about that.” (Email interview with Brian Boyko by Rachel Cobcroft, 28 December 2007)

On the issue of the implementation of Creative Commons licenses, Boyko believes that their structure is simple and straightforward. If problems arise, he believes, it is due to education: ‘People often labour under the delusion that everything is “all rights reserved” or anyone can take it and use it, and that there’s no middle ground.’

Importantly, Boyko believes that Creative Commons greatly increases the utility of a creator’s works: ‘There’s a chance Following Alexis West might rot in my attic, unloved and unsold. But even if the main work is a failure (and it’s my first movie, so it might well be!) if there is a derivative utility to which my work can be used, I want people to be able to do so.’ Further information about the documentary can be found on the film’s blog at http://www.blogphilo.com/main/?cat=4.